We are very excited to announce two Tier II coaches in addition to two Select coaches for the 2022-2023 season that are committed to working with the players to help each of them reach their full potential: Jarett Goodkin, Tom Freeman, Bill Stillwell and Clayton Rodgers. These coaches demonstrate a passion for teaching players to excel while also demonstrating the high standards at Sno-King for character and caring for the families that choose to be part of the Sno-King community. In addition to these 2022-2023 announcements, we will announce more coaches very shortly for Tier II 16U Girls, Tier II 14U Girls, and Tier II 14U Youth teams. You can also find the tryouts schedule now posted for all Tier I and II teams on our website page by clicking the link below.

Tier II 18U AA Head Coach Jarett Goodkin:
Sno-King is pleased to announce that Jarett Goodkin will be returning as Head Coach for 18U AA team and Assistant Coach for the 16U AA team for his second consecutive season.  Jarett is entering his 28th year coaching hockey, and he has coached both rep and recreational teams at all age levels from 8U to 18U. Jarett has been to USA Hockey Nationals four times as youth hockey coach, which includes the last two consecutive seasons with his 16u AA and 18U AA teams respectively. Jarett’s 14U A3 team also won the PNAHA 14U B State Championship during the 2018-2019 season. Jarett joined Sno-King Amateur Hockey Association in 1990 after graduating from the University of Arizona in 1989 where he played four consecutive seasons of ACHA Division 1 college hockey with the University of Arizona IceCats. During his senior year, Jarett played in 28 consecutive games as the IceCats’ starting goaltender, and he played against both ACHA and NCAA Division 1 opponents.

Tier II 16U AA Head Coach Tom Freeman:
Sno-King is pleased to announce that Thomas Freeman will take over for Chas Scott as Head Coach of the Tier II 16U AA team after serving as assistant coach for the 2021-2022 season. He will also return for his second consecutive year as assistant coach for the 18U AA team. Tom played his entire youth hockey career with the Everett Youth Hockey Association on both the Tier I and Tier 2 levels. After leaving Everett, he played for the Bellingham Blazers junior team, but he was injured during his first season, which ended his competitive playing career. Tom started coaching the following year and spent the next five seasons as an assistant and head coach with Everett Youth Hockey Association before moving to Sno-King this past season to be an assistant coach with both the 16U AA and 18U AA teams. Tom is well respected and liked by the players, and we are excited that he will be returning to coach at Sno-King during the 2022-2023 season.

16U A3 (B) Head Coach Bill Stillwell:
Sno-King is pleased to announce Bill Stillwell as the Head Coach for the new 16U A3 (B) team next season. Bill has been coaching with Sno-King for the last 7 years, from 8U through 14U. Most recently, Bill was the 14U A3 coach with an impressive 2021-22 State B Championship win and a 2nd place state finish in 2020-21. A Chicago area native, Bill was also the Sno-King 12U Division Rep and coached 10U and 12U development teams in addition to his regular coaching duties. During the summer, he and his son are both active volunteers in Learn To Play and Try Hockey Free programs at Sno-King. This spring, Bill will be coaching the Lake Washington team for the Western Washington High School Hockey League. He continues to enjoy playing in net with SKAHL, and GSHL prior to the formation of the Sno-King adult program. We are thrilled to have Bill help us launch and lead this new team with Sno-King next season.

12U A1 Head Coach Clayton Rodgers:
Sno-King is pleased to announce Clayton Rodgers as the 12U A1 Coach for the upcoming 2022-2023 season for his fourth consecutive season. One of Clayton’s coaching strengths is helping to prepare players for 14U Tier I and II teams in collaboration with the Hockey Director, Skills/Goalie Coaches, and Tier I and II coaches to support maximum development and readiness. Clayton also brings an extensive hockey background where he lettered in Harvard Varsity Ice Hockey from 1995-1999 in addition to coaching at Sno-King for the past 8 years winning two State championships at 10U in 2018 and 12U in 2021. He supports the America Development Model (ADM) which utilizes long-term athlete development principles as its framework. Clayton has two sons who play hockey at Sno-King which began in the Learn to Play program. We are thrilled Clayton is leading our 12U A1 team again this season and look forward to another successful season ahead!

Tryouts & More information:
In addition to these 2022-2023 announcements, we will also announce coaches for Tier II 14U Youth, Tier II 16U Girls, and Tier II 14U Girls teams very soon. As a reminder, tryout dates and registration for all Tier I and II (Youth and Girls) teams are available on our website here. The detailed tryout schedule which includes dates, times, and rink location is now available here. It is highly recommended that all players at the 16U & 14U levels register for these tryouts as it gives players the opportunity to self-evaluate their skills and be seen by the coaches at all levels.

Please join us in welcoming Coach Goodkin, Coach Freeman, Coach Stillwell and Coach Rodgers to our roster again next season. 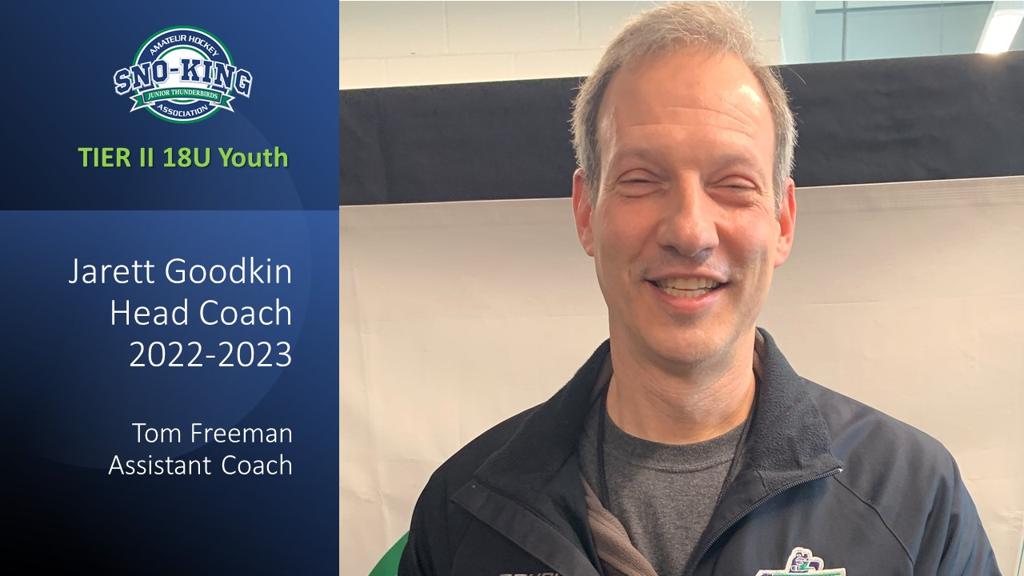 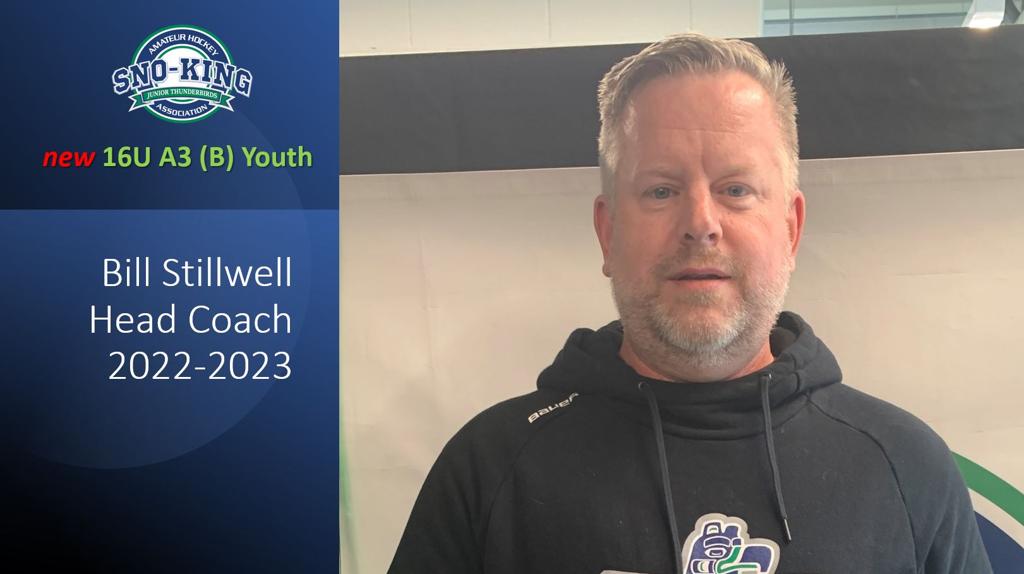 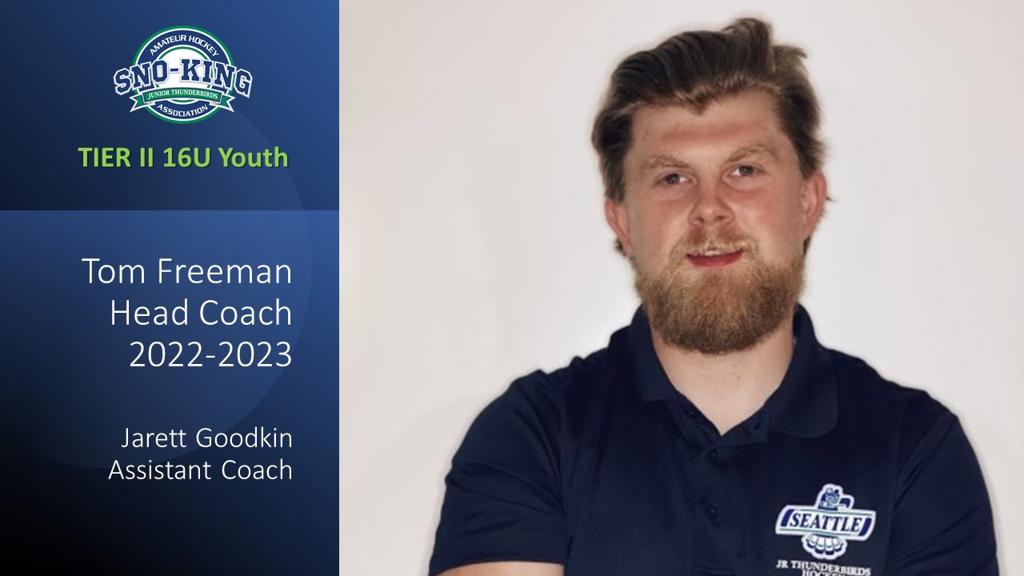 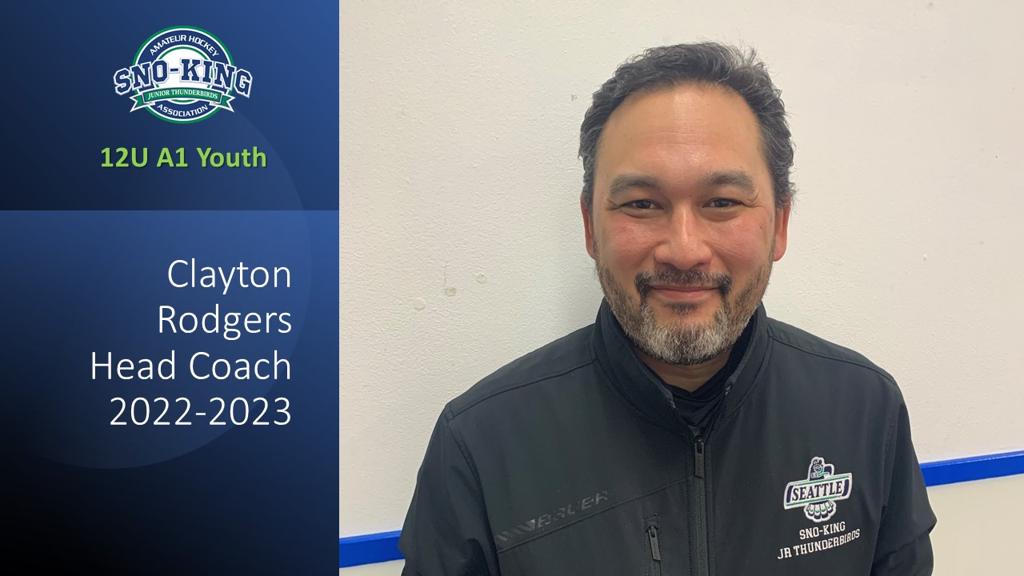